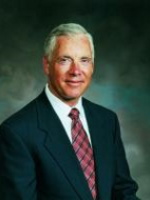 Born on 2 April 1936 in Los Angeles, Dale E. Miller spent his youth in California until his mission to Uruguay in 1956.  Following his mission, he earned a bachelor’s degree from Brigham Young University, then a master’s degree in international management from the University of Southern California. He married Laurel Lee Chandler on 24 June 1960. After accepting a position in Palo Alto, California, he served as a counselor to then-bishop Henry B. Eyring in the Stanford Ward. In time he served as bishop, then high councilor. In 1979, he was called to preside over the Venezuela Caracas Mission. Upon his return, he was called as president of the Menlo Park California Stake. He spent 12 years as an executive of Syntex, a pharmaceutical company, then was a cofounder of Zenger-Miller, a management training company. For the past eight years, he has been a business adviser to international high-technology companies in their early stages.

Elder Dale E. Miller served as a member of the Second Quorum of the Seventy from April 1997 to October 2006