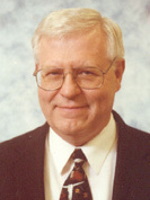 Kahlile B. Mehr was born in Logan, Utah and grew up in Southern California.

He earned a BA in Russian, an MLS in Library Science, and an MA in Family and Local History, all from Brigham Young University.

Kahlile began his employment with the Family History Library in 1980 as a Cataloger and advanced in his career as Senior Cataloger, Cataloging Supervisor, and Collection Developing Specialist, Manager of Member Research Guidance, and is currently Manager of Slavic Collection Management and Cataloging.

His responsibilities in these positions at the FHL involved catologing British and German records, reviewing the work of catalogers of European and British records, directing the work of catologers and technicians responsible for European, Asian, and Latin American records, and developing the collections for Eastern Europe, Spain, Portugal, and the Pacific.

He has personally visited the archives in Eastern Europe many times.

Kahlile has also served as an adjunct instructor for the BYU Independent Study Program and Family History Conference from 1994 to 1998. He has presented papers at the Federation of East European Family History Societies, the Federation of Genealogical Societies, the American Library Association, the Society of American Archivists, the Mormon History Association, the Salt Lake Institute of Genealogy, and the International Association of Jewish Genealogical Societies.

In addition, he serves on the executive committee of the Journal of Mormon History.