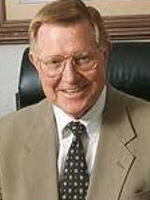 Oscar Walter McConkie, Jr. is an American politician and attorney in Utah and leader in The Church of Jesus Christ of Latter-day Saints. He was the president of the Utah State Senate from 1965 to 1966, and is currently chairman of the law firm of Kirton and McConkie. He has authored several popular books on LDS subjects.

He studied at the University of New Mexico from 1944 to 1946, where he also played football. He then went to the University of Utah, where he received a bachelor's degree in 1949 in political science and a Juris doctorate in 1952. He married Judith Stoddard in the Salt Lake Temple in 1951. They are the parents of eight children.