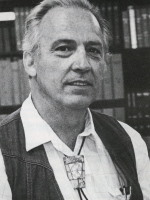 Stanley B. Kimball is a great-great-grandson of Heber C. Kimball. He graduated from Columbia University with a PhD in 1959 and was a professor of history at Southern Illinois University at Edwardsville, where he taught for four decades. He is the author of four books and numerous articles of Mormon history, including Heber C. Kimball: Mormon Patriarch and Pioneer, which won a best book award from the Mormon History Association. He served as historian of the Mormon Pioneer Trail Foundation for many years. In 2001, he retired from SIUE and moved to St. George, Utah. Two years later, he died of cancer at the age of seventy-six.