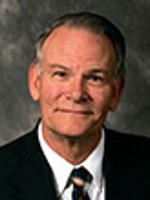 Roger R. Keller is a professor emeritus of Church history and doctrine at Brigham Young University who taught comparative world religions. Former director of BYU's program for the training of military chaplains, Keller also held BYU’s Richard L. Evans Chair of Religious Understanding. Keller has a long tradition of promoting religious understanding and interfaith goodwill. He is a convert to The Church of Jesus Christ of Latter-day Saints who served as a bishop. He previously served as chaplain at a Presbyterian College and as both a Presbyterian and a Methodist minister. Back when he was a Protestant pastor, he was among those who spoke out against The God Makers. Keller earned a PhD in religion from Duke University in 1975. He also served as a Russian linguist for US military intelligence. He co-edited Salvation in Christ: Comparative Christian Views and The Gospel and World Religions. He also wrote Book of Mormon Authors: Their Words and Messages.