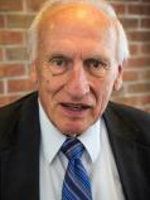 Dr. Evan L. Ivie holds a BS and a BES from Brigham Young University. He has an MS from Stanford University and a PhD from MIT. He was a manager and member of the technical staff at Bell Telephone Labs from 1966 to 1979 and was process administrator for the Safeguard Anti-ballistic Missile System. He was a professor of computer science at Brigham Young University from 1979 to 1997, creating the operating system and networking curricula. In 1992-93 he was a Fulbright Lecturer at Kiev Polytechnic Institute in the Ukraine. In 1997 he created the Pioneer Ancestral Past system for the Church and the Utah Sesquicentennial. In 2000-01 he was the Europe area welfare agent for the Europe Central area supervising humanitarian aid to some forty countries. From 2002 to 2006 he was the director of the BYU--Nauvoo Program. In 2007 he founded GeneSys, a non-profit family history foundation. He has served as bishop, temple sealer, and in other Church positions.