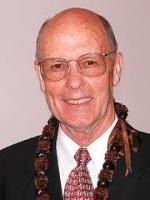 David B. Galbraith was born in Lethbridge, Alberta, to Bruce V. Galbraith and Beth Heninger. As a young man, Galbraith served as a missionary in the Swiss-Austrian Mission for the Church of Jesus Christ of Latter.-day Saints Galbraith attended BYU, where he received a bachelor's degree in political science and a master's degree in international relations. He holds a doctorate in international relations from the Hebrew University of Jerusalem. His doctorate focused on Arab-Israeli relations and conflict resolution. Galbraith married Frieda Greta Lucile Kruger, a native of Amsterdam in the Netherlands. They first met in 1961 while he was living on a kibbutz and studying Hebrew. They are the parents of five children.

Galbraith spent much of his academic career in the Middle East. He lived there for a total of twenty years and was the director of the BYU Jerusalem Center for fifteen years, from its start as a small study abroad program in 1972 through its growth into a major program by the late 1980s. Galbraith has served in theChurch as a stake president, district president, and branch president. In 1972 Galbraith became the first branch president in Jerusalem. As such, he was closely involved with the requests that led to the approval of church meetings forbranches in Israel on Saturdays and the building of the Orson Hyde Memorial Garden. In these activities he worked closely with Harold B. Lee, Edwin Q. Cannon (who as president of the Church's Swiss Mission in 1972 had responsibility for the Church in Israel), Gordon B. Hinckley, and Howard W. Hunter. Galbraith served as president of the Bulgaria Sofia Mission from 2000 to 2003. When he arrived the mission only covered Bulgaria, but in September 2000 the mission was expanded to also include Serbia, Montenegro, and Turkey. He later served as president of the Church's Montreal Quebec Temple from 2009 to 2012.