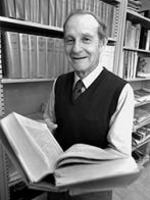 David Noel Freedman, son of the writer David Freedman, was a biblical scholar, author, editor, archaeologist, and ordained Presbyterian minister (ThB, Princeton Theological Seminary, 1944). After earning a doctorate in Semitic languages and literature at the Johns Hopkins University in 1948, Freedman held a series of professorial and administrative positions at various theological institutions and universities.

As the general editor of several distinguished series, including the Anchor Bible Series (1956–2008), Eerdmans Critical Commentaries (2000–2008), and The Bible in Its World (2000–2008), and as the editor and author of numerous other award-winning volumes, Freedman has produced over 330 scholarly books. Freedman and his colleagues brought the world’s oldest complete Hebrew Bible to synagogues, churches, libraries, and individuals around the world for the first time in history. Freedman passed away in 2008.