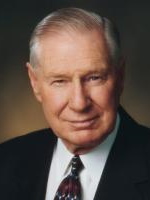 James E. Faust was Second Counselor in the First Presidency of the Church of Jesus Christ of Latter-day Saints. Elder Faust was born and raised in Delta, Utah. His family moved to the Salt Lake Valley when he was in high school, and he graduated from Granite High School, where he won awards for track and lettered in football. Elder Faust served as a missionary for the Church in Brazil from 1939 to 1942. Afterward, he served as a first lieutenant for the United States Army Air Corps during World War ll.

He married Ruth Wright on 22 April 1943, in the Salt Lake Temple. In 1948 Elder Faust graduated from the University of Utah with a BA and a JD. Once he graduated, he worked for a law firm in Salt Lake City. He served in the House of Representatives for the twenty-eighth state legislature as a democrat for Utah's eighth district. Elder Faust became a member of the Quorum of the Twelve on 1 October 1978. On 12 March 1995, he was called as Second Counselor in the first presidency for the Church. He remained Second Counselor until he died on 10 August 2007.