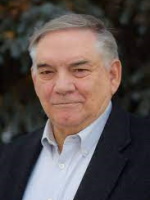 James E. Faulconer is an American philosopher, a Richard L. Evans professor of philosophy at Brigham Young University, the director of BYU's London Centre, a fellow and associate director of the Wheatley Institution, and the former dean of Undergraduate Education and chair of the Philosophy Department at BYU. Brother Faulconer received his BA in English from BYU. He then received master's and PhD degrees in philosophy from Pennsylvania State University. His area of interest in philosophy is contemporary European philosophy, particularly the work of Martin Heidegger and late twentieth- and early twenty-first-century French thinkers.