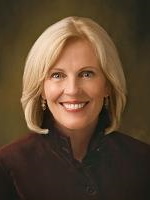 Sister Elaine S. Dalton was born on November 1, 1946 in Ogden, Utah. She received her bachelor's degree in english at Brigham Young University. She is married to Stephen E. Dalton and together they have 6 children, 5 sons and 1 daughter. She was called as the Young Women's General President in April of 2008. Sister Dalton was released from this call in April of 2013.