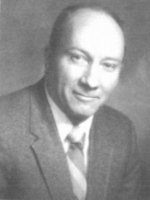 Don F. Colvin wrote his master's thesis on the Nauvoo Temple and served on the Historical Review Committee that examined the architectural plans for the reconstructed temple. Brother Colvin was an administrator of seminaries and institutes of religion in northern California and in the Salt Lake City and Ogden, Utah areas. He served for many years as an instructor at the Ogden Utah Institute of Religion. He obtained his bachelor's degree in education from the University of Utah and a master's degree in Church history from Brigham Young University. Through the years Brother Colvin has served in many church callings, including as a bishop, counselor in the stake presidency, and chaplain in the Utah National Guard. He has served three missions for The Church of Jesus Christ of Latter-day Saints. He is also a former mayor of North Ogden City. Brother Colvin and his wife, Delsa, have two sons and ten grandchildren.