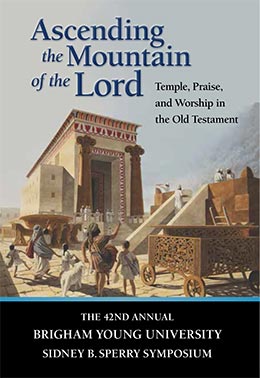 Ascending the Mountain of the Lord

Temple, Praise, and Worship in the Old Testament

“And let them make me a sanctuary; that I may dwell among them” (Exodus 25:8). With this statement, the Lord defined for ancient Israel the primary meaning of the tabernacle and later the temple. The presence of God in their midst at the temple provided a focal point for Israelite worship and represented the link between heaven and earth. The temple was the center of priesthood service, sacrifice, and prayer. Three times a year, Israelite families made pilgrimage up to the temple in Jerusalem to ritually enter into the presence of the Lord and worship him there. A temple psalm illustrates this pilgrimage: “Who shall ascend into the hill of the Lord?” (Psalm 24:3). Based on this passage, the theme of the 2013 Sperry Symposium is “Ascending the Mountain of the Lord: Temple, Praise, and Worship in the Old Testament.”

Likewise, in the Restoration the Lord commanded Joseph Smith and the Saints to build a temple: “And with iron, with copper, and with brass, and with zinc, and with all your precious things of the earth; and build a house to my name, for the Most High to dwell therein” (D&C 124:27). Just as in ancient times, the temple was a place for the Lord God of Israel to dwell in the midst of his covenant people.

From the beginning, Joseph Smith and the Latter-day Saints have understood latter-day temple worship as a continuation of the tradition of temple building and worship in the Old Testament. The plans of the temple were received by revelation just as in the Old Testament. Joseph Smith modeled the dedication of the Kirtland Temple (D&C 109) on Solomon’s dedicatory prayer of the ancient Israelite temple (1 Kings 8), and the pulpits there combined the Aaronic Priesthood, know from the Old Testament with the newly restored Melchizedek Priesthood. The Nauvoo Temple bore the inscriptions “House of the Lord” and “Holiness to the Lord,” which were associated with the ancient temple, and the early Utah temples, like the temple in Jerusalem, were oriented facing east.

Thus, from the Prophet Joseph Smith to the present, gospel scholars have sought to study the Old Testament and understand the temple with the hope that such study will enhance our modern appreciation and understanding of the temple. Scholars like James E. Talmage, Sidney B. Sperry, and especially Hugh Nibley produced studies of biblical temples. This year’s Sperry Symposium is a continuation of Latter-day Saint scholars studying the Old Testament Temple.

Modern Latter-day Saints studying the accounts of the Old Testament temples often find similarities with ancient temples that resonate with their own temple experiences, yet often biblical accounts of the Old Testament temple and temple worship seem strange and incomprehensible. Historians remind us that there are significant differences between the present and the past: that “the past is a foreign country, they do things differently there.” [1] To properly understand the Old Testament temple, it must be studied in its own historical, cultural, and spiritual context. The study of biblical temples has been enhanced in our day by an added understanding of the biblical text, from a burgeoning corpus of archaeological data about ancient sacred places and worship, and from a growing body of cross-cultural studies. Thus the Latter-day Saint scholars in the 2013 Sperry Symposium bring to the biblical text their training and expertise to explore and elucidate the biblical temple and temple worship in its ancient setting.

This year’s Sperry Symposium theme attempts to encompass the various areas of temple study. This volume begins with the keynote address by Professor Kent P. Jackson on three messianic events prophesied in the Old Testament, and the papers thereafter are organized topically for the readers’ convenience. The first section contains papers about sacred space and ritual in the tabernacle, Solomon’s Temple, and Ezekiel’s vision of a future temple. These studies include examinations of sacred space and ritual, the Garden of Eden and the temple, holy garments, gestures of praise, worship, blessing, Egyptian temple sacrifice, and the sacred space in Ezekiel’s temple. The second section contains studies on theophany in the scriptures: occasions when God reveals himself to humans—including God’s appearance at Sinai and Hannah’s encounter with the Lord at Shiloh. The third section includes studies on the Psalms related to ancient Israelite temple worship, comparisons between biblical and Book of Mormon psalms, and a review of the JST changes in the Psalms. Finally, the last section containing two studies dealing with the Old Testament Temple and the Restoration.

Many have given of their time and energy in the conception, organization and presentation of the Sperry Symposium. As the Sperry Committee for 2013, we first express our gratitude to the authors and presenters of the symposium who have brought intellect, energy, and the Spirit to these fine studies. Next we thank the reviewers who carefully read the manuscripts and offered valuable suggestions to the authors. We would also like to thank the editors and designers at Brigham Young University’s Religious Studies Center and at Deseret Book Company who refined and designed this volume. And finally, we thank Patty Smith and her assistants. Patty brings a wealth of experience to the task of organizing the annual Sperry Symposium. She has worked countless hours throughout this year for this volume—and she has already started on the Sperry Symposium for next year!

[1] This is a quote from L. P. Hartley in his novel The Go-Between, and the title of an important book studying this phenomenon: The Past Is a Foreign Country, by David Lowenthal (Cambridge University Press, 1985), which explores how the present and the past share similarities and differences.