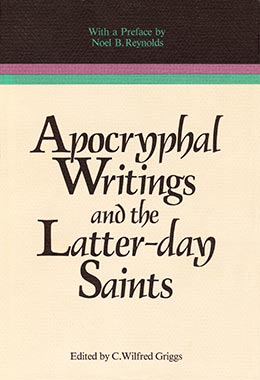 Apocryphal Writings and the Latter-day Saints

Gary Gillum was the humanities and ancient studies bibliographer at Brigham Young University when this was published.

Twenty years ago, as a Lutheran theological student, I had barely heard of the apocrypha. My first paper for Biblical Interpretation 211 was an exposition of the Old Testament Apocrypha, that wonderful collection of fourteen books of Jewish origin which had been included in the Greek and Latin Christian Old Testaments, but excluded from the Hebrew. Thus began my interest in apocryphal literature in general, and although I never became an expert on the apocrypha per se, I have become an expert in where to find them.

Martin Luther had taught us Lutherans, as did Joseph Smith the Latter-day Saints (DC 91), that although the Apocrypha were not to be held equal to the sacred scriptures, they are nevertheless useful and good for reading. They may be hidden, secret, or lacking in authority, but they provide wisdom and inspiration. For Luther, the Old Testament Apocrypha partially filled the 400-year intertestamental gap. I don’t recall which translation of the Old Testament Apocrypha I read, but it was probably a Catholic Douay Version in the college library. Five years later I became familiar with them in the Jerusalem Bible and the New English Bible. The Book of Tobit became my personal favorite.

Interestingly enough, I had not heard of the New Testament apocrypha until after embracing the fulness of the gospel fourteen years ago. Almost immediately I learned about the other Old Testament books, the pseudepigrapha, and others; 1 Enoch, the book of Jasher, and the Apocalypse of Abraham. After reading the latter in the 1898 Improvement Era, I searched in the BYU library further to establish some kind of authenticity for it, discovering then G. H. Box’s 1919 edition of the Apocalypse of Abraham published by the Society for Promoting Christian Knowledge (SPCK). These whetted my untrained and naive mind further so that I soon became excited by all of the little goodies in The Lost Book of the Bible and the Forgotten Books of Eden. Ah yes, what a beautiful doctrine continuing revelation is! It would be several years before I would glimpse anything further than these Infancy Gospels. I had not yet heard of the Oxyrhynchus papyri, the Logia, or the Nag Hammadi. In the meantime, I was finishing my master’s degree in library and information science. I thought it would be fascinating to compare the information dissemination concerning the Cairo Genizah discovery of 1896 with the Dead Sea Scrolls discovery of 1947–48. It proved to be a tedious paper, but one which revealed to me how far in advance the popular media announce a discovery as compared to the later scholarly outpourings. My research into the Dead Sea Scrolls then blossomed with Gaster’s The Dead Sea Scriptures, a very readable edition.

It was after this that a couple of well-meaning Saints acquainted me with The Essene Gospel of Peace and The Aquarian Gospel of Jesus the Christ. These two spurious works fit perfectly Stephen Robinson’s estimation of apocryphal books which “lie for God.” A 1983 publication by Per Beskow called Strange Tales about Jesus: A Survey of Unfamiliar Gospels discusses both of these books, as well as ten others, [1] including the Book of Mormon. Except for the Book of Mormon, I began to see that although the Dead Sea Scrolls tend to expand our knowledge of Christ’s environment and of the early Christian church, most apocryphal literature only confuses us. I was more convinced of this after hearing Dr. Griggs talk about the apocrypha at BYU Education Week. After my blitzed reading of James M. Robinson’s edition of The Nag Hammadi Library, I became so simplemindedly sure that the Gnostics were early-day Mormons than I even wrote a “scholarly paper” entitled “Were the Gnostics Mormons?: A Layman’s View.” Thankfully, I never published that paper, for I had never paid the price of serious study of the apocrypha. Bruce R. McConkie’s words in Mormon Doctrine became a stinging rebuke to me: “To gain any real value from a study of apocryphal writings, the student must first have an extended background of gospel knowledge, a comprehensive understanding of the standard works of the Church, plus the guidance of the Spirit.” [2] But I gave in only partially to my inner feelings about these Gnostics, for by this time I had not only read Elaine Pagel’s The Gnostic Gospels but most of Hugh Nibley’s 150 books and articles. I believe that Hugh Nibley has probably quoted from apocryphal writings more than anyone else in the world. Nibley’s apocryphal, classical, and patristic sources include 105 different apocryphal and pseudepigraphical books, from the Acts of John to the Wisdom of Solomon.

Finally, all of this has led to my reading of a definitive study of apocalyptic writings in Judaism and early Christianity, Christopher Rowland’s The Open Heaven (1982). What could be more exciting to Latter-day Saint readers than chapters like “What Is Below: Man and His World,” “Enoch’s Journey Through the Universe,” and “What Is Above: The Mysteries of God, the Angels, and Astronomy”? Nevertheless, certain cautions now direct me in my study of the apocrypha.

Some time ago I took a straw poll of several BYU faculty members and other scholars, as well as laymen. I asked them how they felt about the apocrypha. Their answers fit into four categories:

After considering these four viewpoints, I have come to my own stance. If the Book of Mormon is not the true, revealed word of God, then nothing else is, including the Bible. Hence, whatever I read as apocrypha, in the very general sense, must not lead me farther afield, but back to the divine word of God.

Where does one find the apocrypha? Libraries are not famous for cataloging books in places most convenient for us. It seems that librarians don’t often ask the scholars where to pigeonhole their books. So, the accompanying bibliography will provide some hints for those of you who want to find apocryphal writings in the library.

Glance at the list of subject headings. You may be wondering, “Why can’t I just look under the term Apocrypha for apocryphal writings?” Because if you do, you will not find anything on the Nag Hammadi texts, the Dead Sea Scrolls, on the Oxyrhynchus Papyri—you will be referred only to books on the apocrypha in general and specifically the fourteen Old Testament Apocrypha. Furthermore, if you want to find everything on the Nag Hammadi, be sure also to check “Gnosticism,” “Coptic,” and “Chenoboskion Manuscripts.” (Many would not think to look under “Chenoboskion Manuscripts,” yet that’s sometimes where most of the material on the Nag Hammadi is found.)

As you locate these sources in the library, you can often find additional books on the same subjects by browsing the shelves nearby. (For example, 229 is the Dewey call number for the apocrypha.) Also note that it is very difficult to find in a card catalog the individual titles for apocryphal books. Unless a particular apocryphal work takes up the major portion of the volume in which it is published, it will usually not be included in the card catalog. As a result of my Nibley research, I am currently in the process of listing all known and generally accepted apocryphal works together with the periodicals, series, monographs, or sets they are found in.

In the meantime, I hope this bibliography will serve to whet your appetite.

(Many religious, biblical, and general encyclopedias contain articles on the above subjects, some with bibliographies.)

Oesterley, W. O. E. An Introduction to the Books of the Apocrypha. London, 1935.

Charlesworth, James H. The Pseudepigrapha and Modern Research, with a Supplement. Chico, CA: Scholars Press for the Society of Biblical Literature, 1981.

Nickelsburg, George W. E. Jewish Literature Between the Bible and and Mishnah: An Historical and Literary Introduction. Philadelphia: Fortress Press, 1981.

Pfeiffer, Robert H. The Apocrypha According to the Authorized Version. New York: Harper [1953].

Rost, Leonhard. Judaism Outside the Hebrew Canon: An Introduction to the Documents. Nashville: Abingdon Press, 1976.

Yadin, Yigael. The Message of the Scrolls. New York: Simon and Schuster, 1957.

[1] The Gospel of Barnabas, Aquila Sentence, the Protocol of the Sanhedrin, the Essene Letter, Report of Pilate, the Unknown Life of Jesus Christ, the Gospel of the Holy Twelve, the Jesus Scroll, the Secret Gospel of Mark, and the Archko Volume.