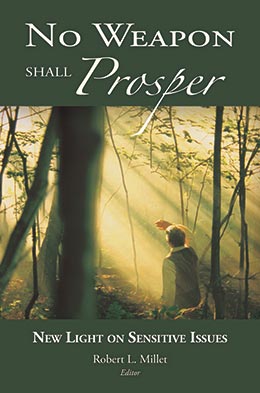 No Weapon Shall Prosper

No weapon that is formed against thee shall prosper; and every tongue that shall rise against thee in judgment thou shalt condemn.

Verily, thus saith the Lord unto you— there is no weapon that is formed against you shall prosper; and if any man lift his voice against you he shall be confounded in mine own due time. Wherefore, keep my commandments; they are true and faithful.

From the time young Joseph Smith Jr. walked out of the grove of trees in upstate New York in the spring of 1820, opposition to his report of what he had seen and experienced has been constant. To be sure, the message of Joseph Smith’s First Vision concerning other churches was offensive to Christian pastors and laity, an attack on who they were and what they stood for. Mormons today need not look about pitifully and ask why everyone seems to be against us—in a very real way, we started the fight! Honestly speaking, to suggest that all the existing churches were wrong and that their creeds were an abomination in the sight of God (see Joseph Smith—History 1:19) was to stir up a hornet’s nest, to invite criticism and suspicion, and to open the door to the possibility of persecution.

While Latter-day Saints do not rush to offend or welcome doctrinal or historical assaults, we probably ought not be surprised by the seemingly unending flow of anti-Mormon propaganda. It comes with the turf we feel duty-bound to defend. To affirm the need for a complete restoration of the gospel of Jesus Christ is to state unequivocally that there was a season of falling away, a time of apostasy within traditional Christianity, and that divine priesthood authority had been taken away and plain and precious doctrinal truths lost or corrupted through the centuries following the deaths of Christ and the Apostles. In short, the very existence of Mormonism is an affront to Roman Catholic, Eastern Orthodox, and Protestant Christians; they feel it is a statement that their religious way of life is somehow defective or deficient. Surely no Restoration prophecy could have been fulfilled more directly and precisely than the one uttered by the angel Moroni when he explained to Joseph Smith “that God had a work for me to do; and that my name should be had for good and evil among all nations, kindreds, and tongues, or that it should be both good and evil spoken of among all people” (Joseph Smith—History 1:33).

While we, as Latter-day Saints, must not allow ourselves to be distracted from the accomplishment of the mission of the Church (to invite all to come unto Christ and be perfected in him) or consumed with provocative materials critical of the Church, the day for ignoring such matters is long past. The Internet is filled with thousands of pages of anti-Mormon polemic, and it is extremely difficult for people to receive an honest and fair appraisal of Mormonism without significant effort. My colleagues and I would certainly rather be devoting our time and energy to proclaiming the restored gospel to the Saints and responding to questions from earnest individuals who sincerely seek information on the doctrines and practices of The Church of Jesus Christ of Latter-day Saints. But we continue to encounter persons, both within and outside our faith, who are troubled, confused, or even perplexed by what they have read or seen or heard. Although this volume certainly does not address itself to every point of opposition (indeed, what single book could?), the contributors have in fact responded to a reasonable cross section of hard questions.

The Apostle Peter counseled members of the Church to “be ready always to give an answer to every man that asketh you a reason of the hope that is in you” (1 Peter 3:15). That is, we ought to be competent disciples, serious students of the gospel who are able to provide a defense of the faith that is as stimulating to the mind as it is satisfying to the heart. As contributors, we are fully persuaded that Mormonism is not only true and faithful but also reasonable; ours is in fact a rational theology. We say this in light of the ever-present reality that the things of God are only to be known and understood by the power of the Spirit of God (see 1 Corinthians 2:11–14). We are committed to our faith and way of life, first and foremost because the Spirit of the living God has borne witness to our souls that what began in Palmyra and now reaches to every corner of the globe is true and is God-ordained and God-inspired. But it also makes good sense to us. Austin Farrer, a close friend of C. S. Lewis, once remarked that “though argument does not create conviction, the lack of it destroys belief. What seems to be proved may not be embraced; but what no one shows the ability to defend is quickly abandoned. Rational argument does not create belief, but it maintains a climate in which belief may flourish.” [1]

In that spirit we present our offering, an effort to respond faithfully and honestly to some of the more troublesome issues faced by the Latter-day Saints. That faith might be strengthened and commitment fortified is our sincere hope.