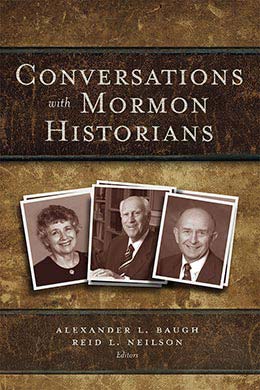 Printed in the United States of America by Sheridan Books, Inc.

Any uses of this material beyond those allowed by the exemptions in US copyright law, such as section 107, “Fair Use,” and section 108, “Library Copying,” require the written permission of the publisher, Religious Studies Center, 185 HGB, Brigham Young University, Provo, Utah 84602. The views expressed herein are the responsibility of the authors and do not necessarily represent the position of Brigham Young University or the Religious Studies Center.

The sixteen interviews contained in this volume tell the stories of remarkable men and women who have made careers out of researching, writing, and teaching about the past. Friends and colleagues conducted these conversations over a decade or so, between November 2001 and September 2012, at the encouragement of Alex Baugh. All were subsequently published in the Mormon Historical Studies journal or Religious Educator periodical, with the hope of someday bringing them together as a single book of personal essays.

While the historians featured in the following dialogues are well known to students of Mormon history, a general introduction to them as a group is illuminating. All of them were born in the United States as members of the so-called silent generation—Americans birthed from 1925 to 1942. As children of the Great Depression years, they grew up between the United States’ greatest generation and the baby boomer generation. These men and women came of age and went to undergraduate and graduate schools during the forties, fifties, and sixties, enjoying the post–World War II economic expansion of America. Our interviewees also inherited and helped lead what has been termed the “New Mormon History.”

Not surprisingly, these historians share a passion for the Latter-day Saint past. They love what they do and do what they love. It was the poet Robert Frost who penned the memorable lines in his classic poem “Two Tramps in Mud Time”:

My object in living is to unite

My avocation and my vocation

As my two eyes make one in sight

As we are all aware, however, merging one’s hobby and occupation is no easy feat. Since the beginning of time, the vast majority of humanity has labored for their daily bread under less than ideal circumstances, having enjoyed precious little time for leisure pursuits or pastimes unconnected to providing for or nurturing their families. So Frost clearly presented a lofty ideal when he continued his verse as follows:

Only where love and need are one,

And the work is play for mortal stakes,

Is the deed ever really done

For heaven and the future’s sakes.[1]

As we have read and reread these conversations, we have come to appreciate that for many Mormon historians work is play and play is work. The men and women featured in this collection have successfully united what they do for a living and what they do for personal pleasure. There seemingly has been little disconnect between their personal and professional lives, and what a blessing that is.

These scholars, coming out of the New Mormon History, follow in the footsteps of other Mormon observers who found meaning in the past. In the preface to his final publication, Encyclopedic History of the Church, longtime LDS assistant Church historian Andrew Jenson reflected on his historical career choices and the happiness they had brought him. “Happy is the man who finds himself doing that in which his heart delights and which harmonizes with his natural ability and desires; but unhappy is he who through force of circumstances, over which he has no control, is compelled through his sojourn in mortality, to do something that is in opposition to his nature and ability,” he wrote just months before his passing. “A man who enjoys his work finds life sweet and pleasant and every moment of it gives him joy and satisfaction, while the man who is forced to do things which he dislikes finds life a drudgery indeed. I have become convinced that historians, like poets, are born as such, and that this enables them to make their life’s labor successful.”[2] In Jenson’s mind, chroniclers of the past, like others laboring in the humanities and social sciences, were a cadre set apart and bequeathed with gifts and talents because they followed their hearts, not their pocketbooks or fate.

Moreover, Andrew Jenson viewed his professional work through a theological lens, hearkening back to time even before this mortal estate. He cast his labors onto a cosmic backdrop of premortal choices and aptitudes, which he drew out of a unique Mormon worldview. “With this belief I can think of the beginning when God stood in the midst of the intelligences or His spiritual children and found among them many who were noble and good. So, in connection with the creating of an earth on which to place His offspring, God chose these noble spirits as leaders and rulers,” he explained. According to Jenson’s gloss of Abraham 3:22–23 from the Pearl of Great Price, Father Abraham and the prophet Jeremiah were foreordained to fulfill their biblical roles, along with many others who were selected for their mortal ministries based on their premortal spiritual progression. Likewise, Jenson was “impressed with the thought that certain spirits were selected to come down and mingle with these leaders and rulers in mortality as poets and historians to record the work to be done by these great and noble ones.”[3] It is clear that by the end of his own life, this historian linked premortal aptitude and interests with mortal vocations and avocations. Ideally, and in his own case as a Mormon historian, Jenson enjoyed “two eyes [that] make one in sight,” as Robert Frost expressed. There was no difference between his employment and enjoyment.

Similarly, as we review and reflect on the personal lives and remarkable careers featured in this volume, we sense that many of these historians feel that they were perhaps prepared, or at least given a definite sense of mission and professional calling that stretches well back in time. It is our hope that you will enjoy reading about their childhoods, academic training, military service, courtships, family lives, professional contributions, books, articles, and personal reflections on their careers.

As the editors of this collection of conversations with Latter-day Saint chroniclers of the past, we had the good fortune to become fast friends as overlapping faculty members of the Department of Church History and Doctrine at Brigham Young University, Provo, Utah, between 2006 and 2009. During those years, we came to understand and appreciate each other’s historical interests and scholarly passions centered on the Latter-day Saint past. During that time, Alex’s research and writing centered on Church history in the American Midwest, while Reid’s scholarship focused on evangelistic practices in Asia and the Pacific Isles. But both of us have been—and continue to be—interested in Mormon historiography, or the study of how the Latter-day Saint story has been told by its leading tellers. Moreover, we have both been the beneficiaries of many mentors in the field and the recipients of a remarkable heritage of Mormon historians who have taken us under their wings and helped us become contributors ourselves to the telling of LDS history. Many of the leading men and women who have helped shape the New Mormon History are highlighted in this assemblage of interviews.

We are grateful for the many people and organizations that helped make this book become a reality. We are especially thankful to the leaders of the Mormon Historic Sites Foundation, a group committed to the preservation of the LDS past, especially its sites, events and structures, for their blessing on this project. Almost all of the essays included in this volume initially ran in their Mormon Historical Studies journal, which was edited by Alex. MHSF board members Kim R. Wilson, Richard N. W. Lambert, Michael L. Hutchings, Jeffrey N. Walker, Robert S. Clark, Kenneth R. Mays, and Heidi S. Swinton continue to bless the Mormon historical community with their financial generosity and preservation mandate. The directors of the Religious Studies Center at Brigham Young University were also supportive in allowing us to reprint the late Robert J. Matthews interview, which ran in their Religious Educator journal. Lastly, we thank our colleagues in Religious Education at Brigham Young University and the Church History Department of The Church of Jesus Christ of Latter-day Saints, Salt Lake City, Utah.

A number of editorial assistants, especially Elizabeth Pinborough and Kelley Konzak, helped transform a decade-long project and idea into a published book. We have updated the previously published interviews according to the sixteenth edition of The Chicago Manual of Style and the eleventh edition of Merriam-Webster’s Collegiate Dictionary. In some instances, we have spelled out contractions to make the interviews sound less colloquial. We have corrected grammar in places where it might be unclear. We have also edited out portions of the interviews that are overly personal or not relevant to the subject of Mormon historiography or these historians’ professional careers. Moreover, we have capitalized “the Church” when it refers to The Church of Jesus Christ of Latter-day Saints and have capitalized “the Prophet” when it refers to Joseph Smith, first President of the Church. Because these interviews are reprinted from earlier sources, we have retained some dated information and have updated some information, as we have deemed necessary. The LDS Church Archives are now at the Church History Library in Salt Lake City, Utah, but we have let “Church Archives” stand in the interviews. We have updated certain Church organizations: “Council of the Twelve Apostles” to “Quorum of the Twelve Apostles,” and “Correlation Committee” to “Correlation Executive Committee.”

Most of all, we appreciate and applaud the historic contributions of the senior Mormon scholars highlighted in this volume: Thomas G. Alexander, James B. Allen, Richard Lloyd Anderson, Milton V. Backman, LaMar C. Berrett, Claudia L. Bushman, Richard Lyman Bushman, Kenneth W. Godfrey, Dean C. Jessee, Stanley B. Kimball, Carol Cornwall Madsen, Robert J. Matthews, Max H. Parkin, Charles S. Peterson, Larry C. Porter, and Laurel Thatcher Ulrich. These men and women are among our historical heroes, and we are honored to gather and retell their stories for the “rising generations” of Mormon historians (Doctrine and Covenants 69:8). We continue to be as impressed with their personal lives as we are with their professional accomplishments.

In fact, as we get older, we find that we care as much about what historians become as what they produce. As Richard Bushman explains, “The trouble with wishing to write history as a Mormon is that you cannot improve as a historian without improving as a man. The enlargement of moral insight, spiritual commitment, and critical intelligence are all bound together. A man gains knowledge no faster than he is saved.”[4] We are grateful for these faithful historians and their histories.